Though natural product chemists who specialize in marine-sourced agents are usually aware of the contribution of structures based upon dolastatin 10 as warheads in antibody-drug conjugates (ADCs), tar­geted against cancers of varying etiologies, the majority of ASP members may not be aware of the significant contributions made as a result of studies by the Pettit group starting in the middle 1960s. (Note, structures are not numbered, simply named.)

ASP member Dr. Bob Pettit and his group at Arizona State University (ASU) were funded by NCI (in the same time frame as Wall at RTI) with the ASU group investigating marine inverte­brates, and the RTI group, plants. These led to the bryostatins and dolastatins at ASU, and taxol and camptothecin at RTI.

The dolastatins (which now number about 16 different structures) were initially isolated from the Pacific nudibranch Dolabella auricularia1 and, due to the very small amounts ob­tainable due to the size of the individual organism, in order to obtain enough material to test in suitable screens, the Pettit group embarked on a “tour-de-force” in the 1980s to synthe­size the necessary “building blocks” (modified amino acids) to produce selected dolastatins, including dolastatin 10 (Figure). The isolation and identification of dolastatin 10 was first reported in 1987,2 with a patent with ASP member Dr. Sheo Singh (later at Merck in their then Natural Products group) issued in 1990.3 This was followed over the next few years by a series of reports covering the synthetic processes involved with a thorough review up through 1997 by Pettit,1 and then in 2011, an updated review by Flahive and Srirangam was published as a book chapter with updates by the editors giving data up through that year.4

Dolastatin 10 was shown to be a potent tubulin interactive agent, and over the years, the Pettit group synthesized vari­ations on the base structure leading to auristatins E, PHE, PE and PYE, all with IC50 values in the 10-100 pM range (Figure). Though some, including dolastatin 10, auristatin PE (aka soblidotin, TZT-1027 and YH-501) and tasidotin (Figure), entered clinical trials as single agents, none proceeded be­yond Phase II due to toxicity and/or lack of efficacy in trials covering the late 1900s to early 2000s. Dolastatin 10 had some modest efficacy in a Phase I trial but later work showed either no efficacy in a Phase II trial against prostate cancer or minimal activity against advanced breast cancer.5 This paper in 2005 was the last one currently known for dolastatin 10 as a single agent. In fact, there is still interest in the basic skel­eton even as late as 2018 when Yokosaka et al.6 reported on novel “auristatins” with the thrust towards molecules suitable for coupling to monoclonal antibodies. Then in 2019, Yang et al. from Sanofi described a series of methods for linking high­ly bioactive materials such as dolastatin 10 to antibodies by use of fragment coupling.7 Other derivatives will be mentioned later when the current “warheads” are described.

THE “TRUE PRODUCER” OF DOLASTATINS

In 1998, ASP member Dr. Hendrik Luesch, who was then a graduate student in the lab of the late ASP member, Dr. Rich­ard Moore at the University of Hawaii, reported the isolation of symplostatin 1 (Figure) from the cyanophyte Symploca hydnoi­des collected in Guam and, working with a multidisciplinary group, demonstrated an activity similar to dolastatin 10.8 This compound was a close relative to dolastatin 10, and then lat­er, Luesch et al. reported finding dolastatin 10 in D. auricular­ia feeding on the Symploca strain VP642 in Palau.9 Thus, the dolastatins are cyanophyte metabolites and are “adopted” by the nudibranch as a protective toxin. This is analogous to the sequestration of (probably) insect toxins by tree frogs in Ecua­dor as described many years ago by NIDDK investigators led by the late ASP member Dr. John Daly.10

ADCETRIS® THE FIRST DOLASTATIN-RELATED ADC (APPROVED BY THE FDA 2011)

This ADC-used monomethyl auristatin E (Figure) with an aver­age of four molecules linked to the antibody using a valine-citrulline linker. The initial background starting from a mAb linked to auristatin E (Fig 2. 8 in 2019) and/or the monometh­yl derivative (MMAE) was first described in 2003 by Seattle Ge­netics scientists11 with a full description of the developmental history being published by Senter and Sievers of Seattle Ge­netics in 2012.

CURRENT STATUS (AS OF 31 OCT 2020) OF DOLASTATIN-DERIVED ADC CANDIDATES.

In the following table, the compounds will be listed in this order: Generic Name; Trade Name; Approved Date; Phase III; Phase II; Phase II/I; Phase I; IND submitted. In each case, the warhead will be given. 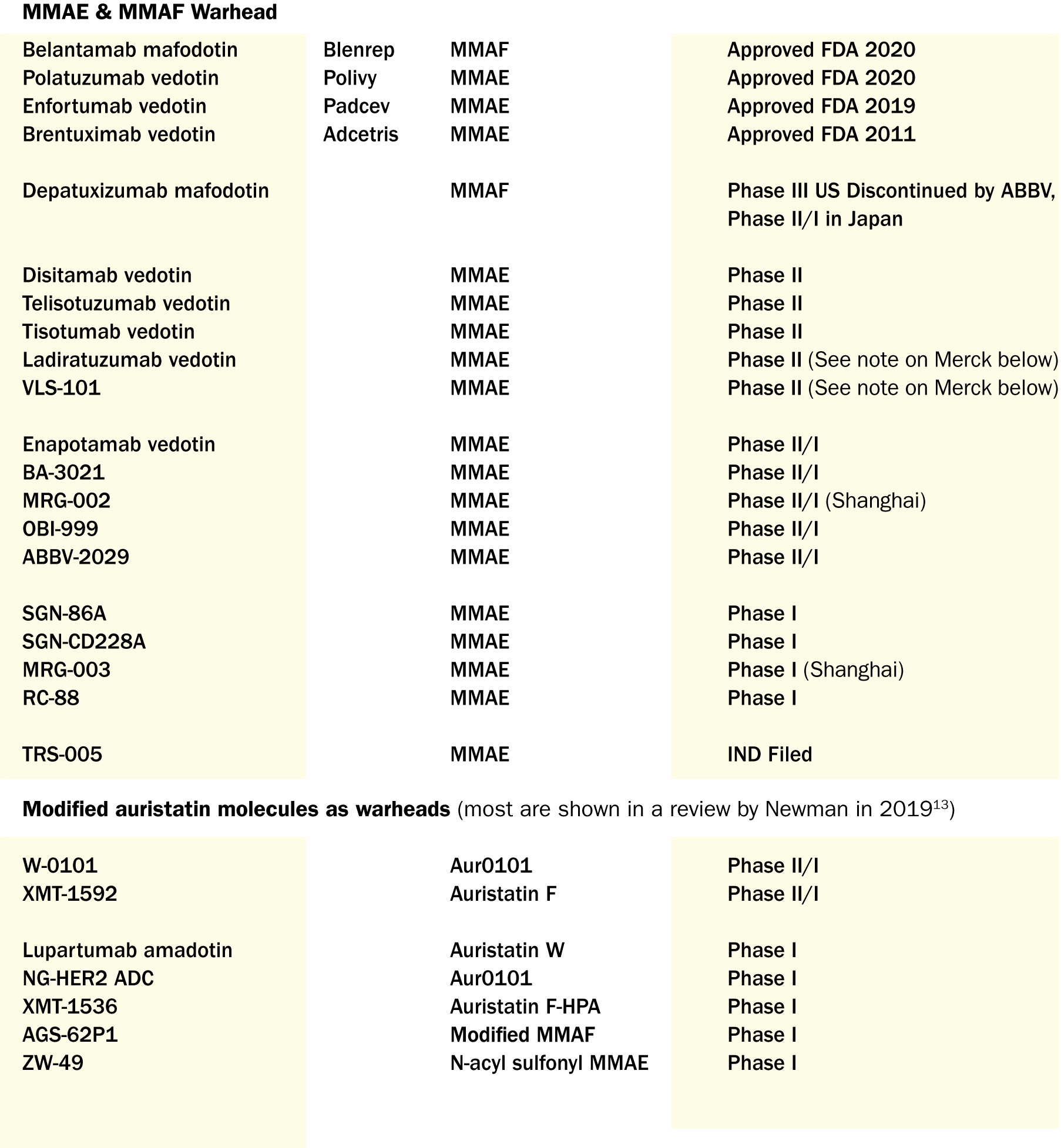 In September 2020, Merck (US) announced that they were making an upfront payment of $600 million to Seattle Genet­ics to codevelop the Phase II ADC Ladiratuzumab vedotin and will invest $1 billion in Seattle Genetics shares (approx. 3% of shares). Then in early November, they paid $2.75 billion to ac­cess VelosBio’s ROR1-targeting ADC VLS-101. Both of these ADCs utilize MMAE as their warhead, a compound based on the auristatin synthesized originally in the Pettit laboratory as a “lineal descendent of dolastatin 10.”

The irony in both these acquisitions may not be lost on the old Merck Rahway Natural Products team that was dissolved quite a few years ago, as one of the patent holders on dolas­tatin 10 was a leader in that group, Sheo Singh. 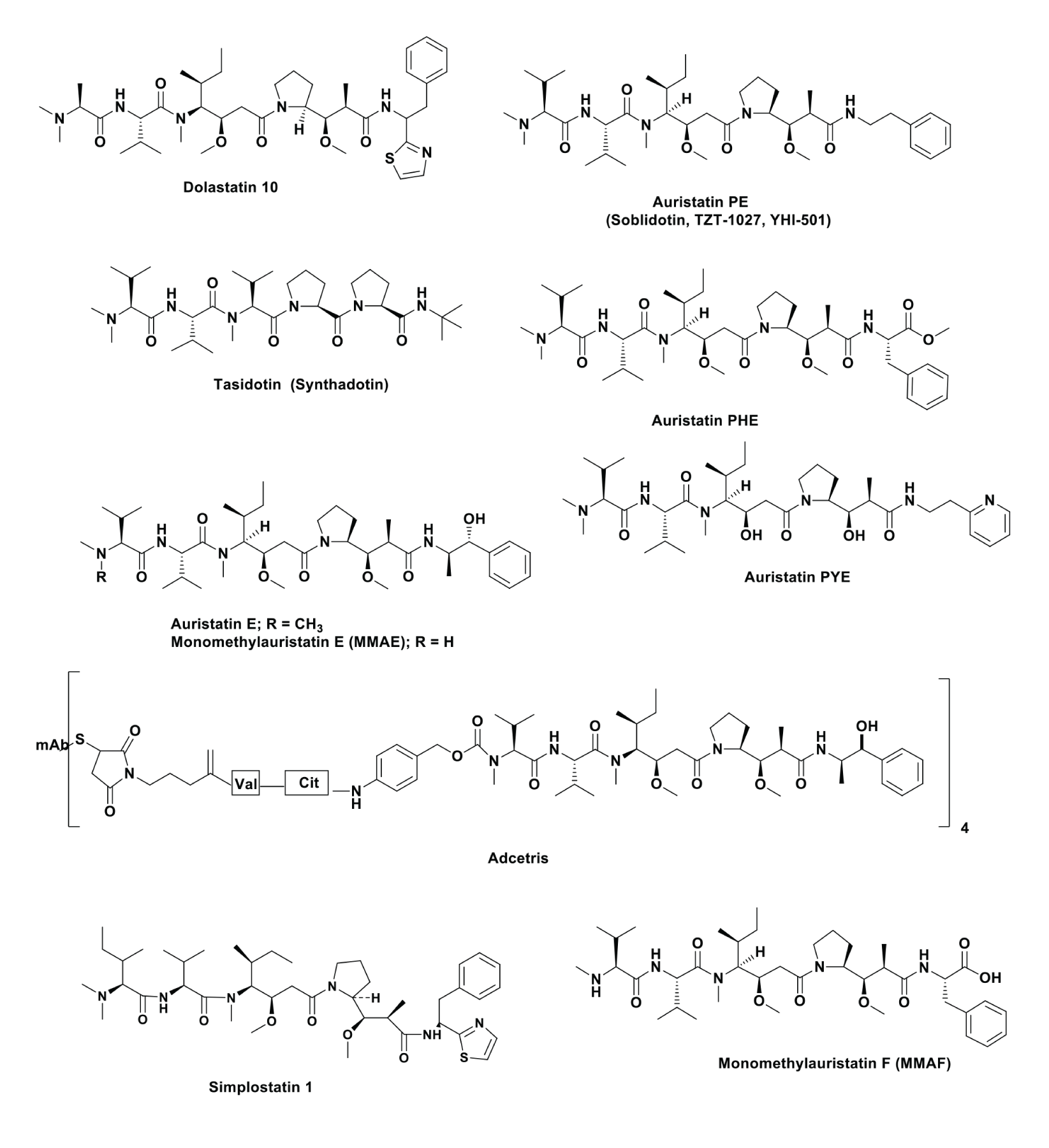