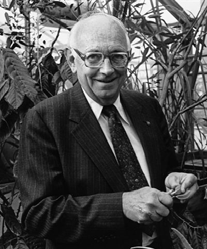 President (1962-1963)
Honorary Member (1984)
Originally from Kansas, Jack Beal joined The Ohio State University (OSU) as a graduate student in 1950 under the supervision of the then Dean, Bernard V. Christensen. Following his graduation in 1952, he was appointed Assistant Professor in the College of Pharmacy that same year. His main research interests focused on isoquinoline-type alkaloids of the genus Thalictrum and their biological activities. Dr. Beal’s collaborations with Raymond W. Doskotch and Popat N. Patil led to numerous articles on the constituents of Thalictrum, describing more than 175 alkaloids, 80 of which were novel. In a career that spanned over 40 years, Dr. Beal served as the advisor for 15 doctoral and 12 master’s level students, of whom many pursued positions in active research and teaching. Dr. Beal was a founding member of ASP and he served as its third president. Dr. Beal contributed remarkably to the Society through his tenure as Editor-in-Chief of J. Nat. Prod. (Lloydia) (1977-1983), during which time the journal changed its name and was established as a forum for high-quality publications on natural products research. Dr. Beal was the recipient of many awards, among them the Research Achievement Award in Natural Products Chemistry from the American Pharmaceutical Association Foundation in 1982 and Honorary Membership of ASP. He was designated as “Distinguished Economic Botanist” in 1989 by the Society of Economic Botany. In recognition 50 of his outstanding contribution to the College of Pharmacy at OSU, where he also served as Assistant Dean and co-founded the Pharmacy Alumni Association, the “Jack L. Beal Professorship and Endowed Chair” was established for a prominent natural products chemist and pharmacognosist. (Mark Bahar)
Back to list