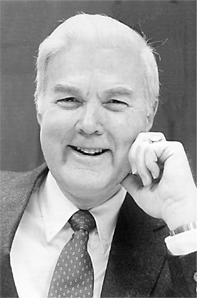 President (1959-1961)
Honorary Member (1985)
Tip Tyler was one of those unique individuals who cast a long shadow in life having had a profound impact on pharmacy education, natural product science, and the use of herbal medicine by the American public as well as the worldwide community. He was a renowned educator serving Purdue as Dean of Pharmacy for twenty years before his selection as executive VP for academic affairs. While a professor at the Univ. Washington, he conducted research on the chemistry of toxic mushrooms and other fungi. He was the senior author of the most widely used text in pharmacognosy in the US (Pharmacognosy, co-authored with Lynn Brady and Jim Robbers). Incidentally, he also published on the subject of stamp forgeries. The ASP owes Tip a tremendous debt. He served as its first president, guiding the organization through the critical first two years of its existence, and he was the principal force in the negotiations to obtain Lloydia (J. Nat. Prod.). In addition, he played a major role in forging the friendly ties with the Gesellschaft für Arzneipflanzenforschung (GA), 87 which has resulted in our joint international meetings (later expanded to include Association Francaise pour L’Enseignement et la Recherche en Pharmacognosie and the Phytochemical Society of Europe) every five years, starting with Vienna in 1970. He was elected to the GA Board of Directors and was an honorary member. He thoroughly enjoyed sharing his knowledge, and he was a master of communication. After he retired in 1991, he devoted his efforts to the area of herbal medicine, writing four books as well as numerous articles in the scientific and lay press. He received many honors and accolades, but he often stated that even though these meant a lot to him, what he cherished most was the many friendships he established during his life's work. (Adapted from a memorial written by James E. Robbers; ASP website.)
Back to list