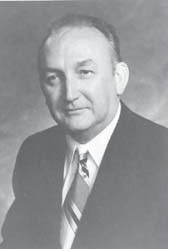 President (1964-1965)
Melvin Gibson received a B.S. in Pharmacy from the Univ. Nebraska in 1942. While there, he played trumpet in the University Symphony, and achieved the rank of Major in the ROTC. After graduating, he served in the army and received a Bronze Star and Purple Heart. He then completed a M.S. degree in pharmaceutical chemistry at the Univ. Nebraska and went on to the Univ. Illinois at Chicago to complete his Ph.D. In 1949, he joined the faculty at Washington State University College of Pharmacy, where in 1955, he was appointed full professor, and was a leader in pharmacy education until his retirement in 1985. He served as editor of the American Journal of Pharmaceutical Education from 1956-1961, and was a co-author and editor of Remington’s Pharmaceutical Science from 1965 to 1985. He received many honors and awards, including the American Association of Colleges of Pharmacy (AACP) Pharmacy Educator of the Year Award and the Rufus A. Lyman Award from the AACP. He was a Senior Visiting Fellow of the Organization for Economic Cooperation and Development at the Royal Pharmacy Institute in Stockholm, Sweden, and at the University of Leiden, Holland. (Based on the obituary by the MRG Family in the Summer 2008 ASP Newsletter)
Back to list