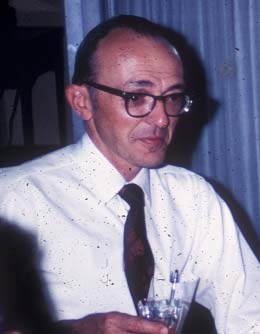 President (1963-1964)
Honorary Member (1986)
Gordon H. Svoboda, was a giant in natural products cancer drug discovery and development research, having not only discovered vincaleukoblastine (Vinblastine) and leurocristine (Vincristine), along with dozens of other “Vinca” alkaloids, but also through the force of his personality, convinced his employer, Eli Lilly & Co, to develop and market Vinblastine and then Vincristine. The discovery and marketing of these first major natural product anti-cancer chemotherapeutic agents profoundly altered the landscape in pharmacognosy and natural products chemistry research, with many of us being inspired to take up our own cudgels in this area of research. In a quirk of time line, Gordon’s monumental discoveries coincided with the birth of the ASP, and the establishment of the Natural Products Branch at NCI (Dr. Jonathan Hartwell, Director). Gordon received his Ph.D. (Pharm. Sci.) from the U. Wisconsin (1949), followed by an academic post at the Univ. Kansas before joining Eli Lilly & Co., where he remained until retiring in 1980 after 28 years. Gordon considered himself a pharmacognosist and was an active member of ASP from its early years. He served as its 4th president, and was later designated an Honorary Member. His research achievements and publication record (including numerous patents and over 65 peer reviewed articles) garnered him many honors, and although his career was in industry, Gordon maintained his academician’s mentality and strove to serve as an inspiration to his colleagues and as an informal mentor to young scientists and graduate students, at least one of whom he inspired to stay in school eventually became a president and honorary member of the ASP. Gordon was so highly regarded, that three former Presidents (Tyler, Fong and Robbers) attended his Memorial Service to eulogize/celebrate his life. Gordon lived and worked by the credo, “Work hard, play hard”. He was an unforgettable character to those who knew him. (Harry Fong and Norman Farnsworth)
Back to list