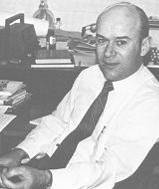 President (1973-1974)
Bill Kelleher received B.S. and M.S. degrees from the Univ. Connecticut (UConn) School of Pharmacy, and his Ph.D. from the Univ. Wisconsin (under Marvin J. Johnson). He was a professor of Pharmacognosy for 28 years at the UConn School of Pharmacy, and, for part of that time, he served as Assistant Dean for Graduate Education & Research. He had many collaborations, including work with Dr. Arthur Schwarting, and also was known to work many long hours helping him edit Lloydia, which later became J. Nat. Prod.. His main research interests were in microbial biochemistry, fermentation, and applied microbiology. Much of his work focused on the secondary products of Claviceps paspali (which produced lysergic acid derivatives), Amanita muscaria, and others. Jack Rosazza and Bob Krueger have shared stories about working with Dr. Kelleher, and it is clear that he was an outstanding mentor and stern taskmaster who took research, teaching, and training scientists very seriously. He also had a quirky sense of humor, loved to play practical jokes, and knew how to motivate students to make their best effort. Jack worked for him in the late 1960s on a project entitled “The production of lysergic acid derivatives in submerged culture: Inorganic nutrition studies”. Despite what one might imagine about the inner workings of a laboratory engaged in such projects in the late 1960s, Jack had this to say about the experience: “Anyone who worked with Bill realized very quickly that they would be held to the highest standards of performance and levels of accountability for everything.” (Based on the obituary by WPJ, Jack Rosazza, and Bob Krueger in the Summer 2008 ASP Newsletter)
Back to list