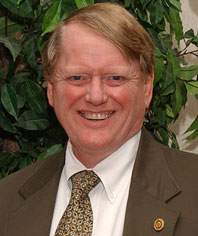 ASP Foundation Treasurer, Honorary Member
Honorary Member Profile: Robert J. Krueger I have been asked to provide my career profile as an Honorary Member of the ASP, elected in 2011. My love for this science started in 1964, when as a high school sophomore I read Margaret Krieg’s “Green Medicine”. It featured a picture of the pharmacognosy group at the University of Connecticut, Storrs, College of Pharmacy. I told my parents that was where I was going to college! (It was actually cheaper than my home University of Wisconsin, Madison.) I enrolled in the fall of 1966 and shortly thereafter became an undergraduate research assistant for William Kelleher. There I worked on 2,3-dihydroxybenzoic acid production and influence on Claviceps paspali ergot alkaloid fermentation cultures. My service commitment started there when I became a member of Alpha Phi Omega, a service fraternity. I was mentored at UConn by Art Schwarting, Bill Kelleher, Mike Edwards (all past ASP Presidents) as well as Dick Hutchinson, Ralph Collins, and Anna Rother. At UConn I met my wife, Beth, and this year we will celebrate our 50th anniversary. She has attended almost as many ASP meetings as I have. From UConn I enrolled at the U Iowa for my PhD studies, working under David Carew on alkaloid production in tissue cultures of Catharanthus roseus. Jack Rosazza was also a major influence in my graduate career. Both are former ASP Presidents. In 1975, I joined the ASP and the Faculty of the College of Pharmacy, Ferris State University. Having had great teachers in my career, I was ready to teach the world about my exciting science, remaining there until my retirement in December, 2011. While at Iowa, my service activities took a hiatus, but at Ferris they resumed in earnest. These activities lead to my being awarded the University Faculty Service Award in 2009. In 1988 I was conferred the Michigan Association of Governing Boards Distinguished Faculty Award. My philosophy based on my Rotary motto ‘Service above self, has always been to help wherever needed whether it is via my employment, my community, or the ASP where I have been a member of almost every standing committee in our Society. In 1992 I was named Treasurer of the ASP Foundation, having been mentored for this position by David Slatkin, a former Society President and long time Society Treasurer. As ASPF treasurer I served at the pleasure of the Society’s Executive Board under many Presidents and ASPF Chairs. I am most grateful to John Cassady and John Cardellina for their friendship and mentoring. You have read the word ‘mentoring’ many times in this article. That is what the ASP does best. It is a ‘family of scientists’ who excel in producing good science. Its members unselfishly help their younger members to achieve that principle. Ferris was not a research institution, yet I was able to complete projects and publish with the help of colleagues around the US such as John Staba (U Minn), Doug Kinghorn (U IL, OSU), and Carmine Coscia(U St. Louis, a 17 year collaboration). As I have prospered from my membership in the ASP, I consider it an honor to serve it through a kind word of encouragement, the handing out of an award check, or a direct helping hand. You never know how these small efforts can balloon into much larger conclusions. I have two daughters both of whom attended many ASP meetings in their younger years. They are now competent scientists in their own rights in part from the experiences they had with ASP members. I intend to continue my service as long as the ASP needs my help.
Back to list