By Erin A. Conley, PhD Candidate

The August 2021 issue of the Journal of Natural Products featured an article from the Hicks lab at the University of North Carolina at Chapel Hill, which investigated antimicrobial peptides (AMPs) from a hot new source organism. Titled “Too Hot to Handle: Antibacterial Peptides Identified in Ghost Pepper,” this article highlights the utility of complementing in silico predictions with peptidomics and bioactivity assays in the discovery and characterization of AMPs from plants. Following, Dr. Leslie Hicks and her graduate student Kevin Culver discuss their article, pets as lab mascots, and how Kevin came to be known as the “peptide whisperer.” Full article here: https://pubs.acs.org/doi/10.1021/acs. jnatprod.1c00281

How did you become interested in investigating antimicrobial peptides from ghost peppers?

Culver: I’m a pretty big fan of spicy foods in general. I have a collection of hot sauces. There seems to be a history of medicinal use from peppers, and there are a few AMPs that have been published from peppers, but it seems like it’s a little underexplored. I thought that trying ghost pepper would be interesting, and I got some really good data out of it.

Where did you collect your ghost peppers?

Culver: We have a greenhouse space where we typically will grow our plants, so we purchased the ghost pepper seeds and then grew them there.

Could you summarize for a broad audience the major takeaways of the paper?

Culver: We were able to do a lot of in silico AMP predic¬tions and see a number of potential AMPs from the plant. We screened the extracts for bioactivity and were able to see exciting antibacterial activity against several different pathogens. We ended up attributing the activity to two nov¬el AMPs that don’t really classify into any of the known major plant AMP families. We were able to determine the full sequences and experimentally determine the disulfide bond linkages. We did a lot of additional characterization on one of the AMPs which was much more abundantly expressed. We looked at the mechanism of action and saw that it is membrane-lytic. We were able to determine that it is non-hemolytic, which was exciting. We did a lot of biologi¬cal characterization. We have collaborators at USF that can screen against an ESKAPE pathogens panel, and we were able to see a lot of activity against those pathogens.

Who helped contribute to the success of this project?

Culver: Definitely our collaborators in the Shaw lab at the University of South Florida did a lot of the antimicrobial assays, so that was a big contribution. My lab mates in general helped to guide me with the data analysis.
Hicks: The PepSAVI-MS was established by one of my first graduate students, Christine Kirkpatrick, and that pipeline enables detection of things that can’t necessarily be predicted.

Who came up with the catchy title?

Culver: That was actually Nicole Parsley, a former graduate student.

What was the most exciting day in the lab when you were working on this project?

Culver: Probably the initial bioactivity screening. It’s pretty rare to see so much activity when we screen plants like that, so that was pretty exciting.
Hicks: We had three [graduate] students on this project when Kevin came into the lab, and we had many undergraduates who had grown 80 plant species. We know cyclotides are in these Viola species, and we had done a lot of cool work in Amaranthus. We have screened a lot of plants, and they might have a little bit of activity or a little bit of a pep¬tide trace. Kevin has the nickname the “peptide whisperer” because he came in and said, “I’d like to try ghost pepper,” and boom! Massive signal in his SCX traces, massive activ¬ity, beautiful novel peptides, and this is just his first paper.

What was one of the biggest challenges with this work?

Culver: Experimentally determining the disulfide bonds a little challenging. The spectra were a lot more complex, and, especially for CC-AMP2, we had to do a partial acid hydrolysis, which is a lot of non-specific cleavage, and it was a little challenging to comb through that data.

Were there any surprising findings in the course of this project?

Culver: Basically how unique these peptides seemed, and the fact that they seemed to be pretty broadly expressed, not just across other pepper species that have reference proteomes available but also other plants within the Solanaceae family, which is the family that the Capsicum genus is in, so I think that’s pretty surprising.

Hicks: Kevin went back in the prediction process to see why these particular CC-AMP1 and CC-AMP2 don’t make it through the process. It’s because they’re in the genome. I think as we discover new peptides that fall outside of these canonical classifications, we can improve those prediction algorithms because it is much higher throughput. Kevin undersells how much work it took to get the sequence and to know where any modifications were. Even with the reference genome, it’s not matched to his sample so there can be residue differences that shift masses, so he manually interprets that data. It’s not automated proteomics; the characterization is really challenging. 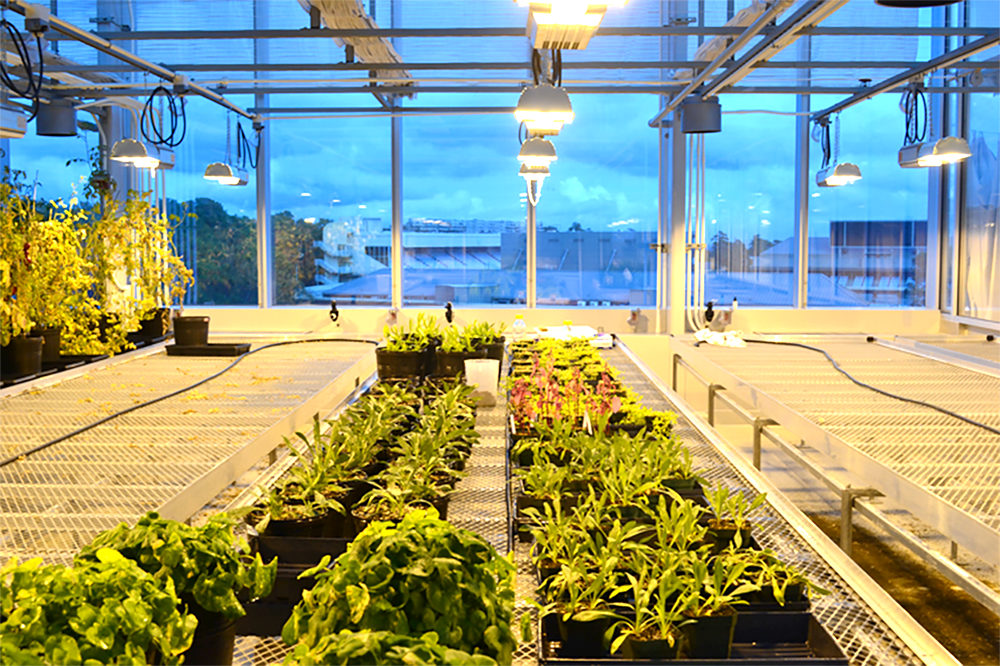 What are favorite social activities of the Hicks lab?

Hicks: Pre-COVID, in the summers, generally there is another mass spectrometry lab on campus, and we would have monthly group meetings and go out with them. Also in the summer we would have what we call the “Glicks Olympics,” with the Glish and Hicks labs, so each month we play a sport and there is a trophy that we fight over. We would pick one sport each month, like kickball, or volleyball, or bowling. We would just go play and have fun.
Since COVID, we’ve had some happy hours online, and beginning last December we would meet at the park all masked up, but it’s been less social than before, for sure. We have lab T-shirts, lab mascots on the wall...

You have a lab mascot? What is it?

Hicks: All of my students, we all have animals, so we have...
Culver: Like a pet wall, basically.
Hicks: And then when they graduate, they get a little graduation cap on their pet.

As someone who has spent time both outside and within academia, do you have any advice for students and early-career scientists who are trying to decide which direction to go?

Hicks: I think it’s good to keep your options open and keep your eyes open for opportunities. Being as productive as you can regardless of where you’re at will leave doors open. [With my students] I try to make sure people know how to network and how to position themselves to open those doors, so people know what they’re interested in and what the possibilities are. Keeping options open and continuing to show productivity wherever you are can be really good to leave you flexible in terms of where you can go. 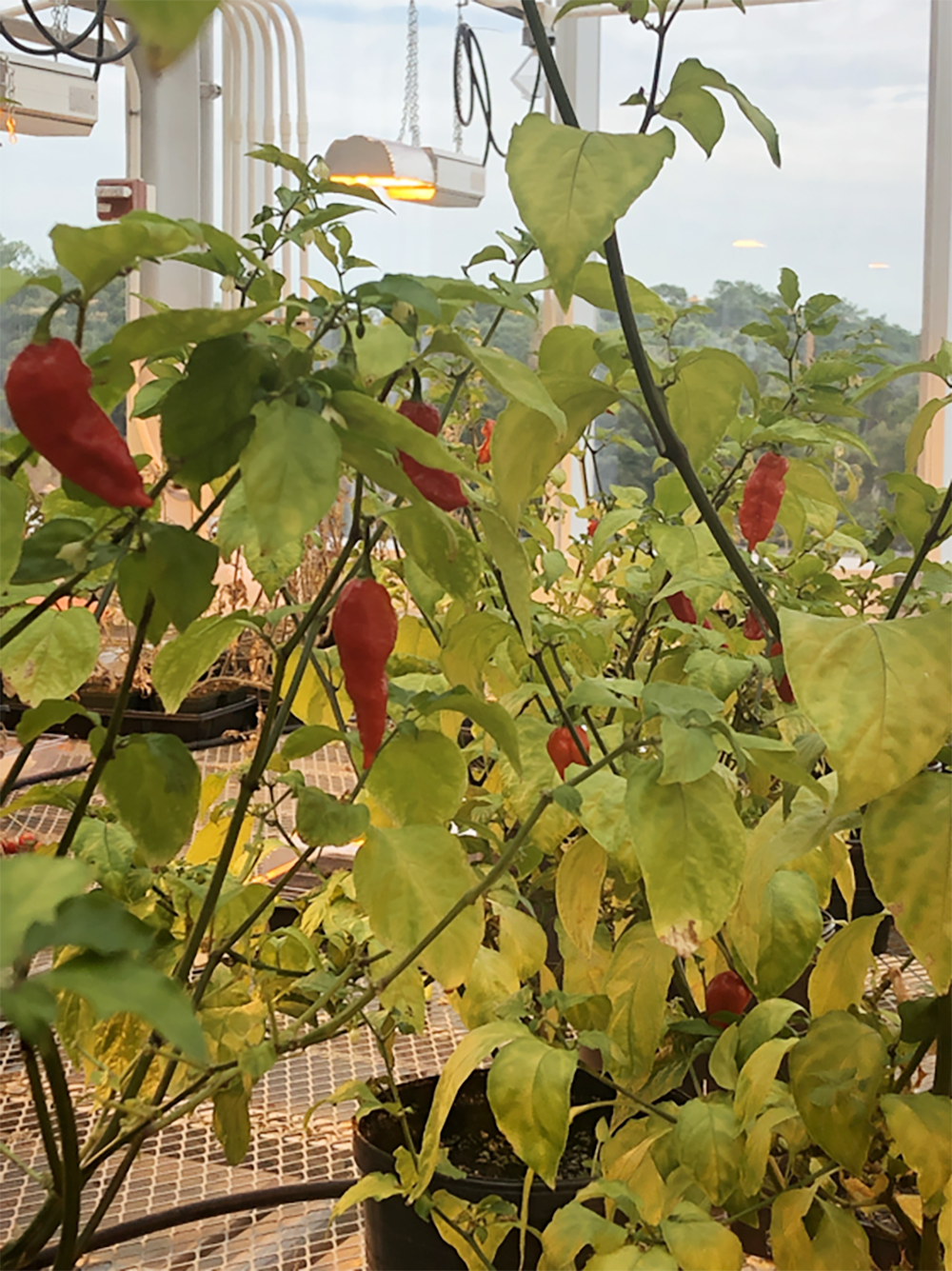 Do you have any general tips for women who are pursuing these careers?

Hicks: I think that it’s going to be difficult at times. But if we don’t persist, there won’t be role models that can change things for the better for later generations. No one is going to say, “Hey wait, this is unfair,” if no one had to experience that.

Have you ever eaten a ghost pepper?

Culver: I have not!
Hicks:: You’ve tasted something with it in there though, right?
Culver: I’ve had things with ghost pepper, a lot of really hot, hot sauces, but I’ve never eaten the actual pepper. I’ve never really had the opportunity, I guess.
Hicks: We don’t eat the ones we grow in the greenhouse. My tolerance for spicy is nil. We have a ghost pepper hot sauce, and I’ve tasted like 3 μL of whatever that sub¬stance was and that was sufficient. I have ordered some ghost pepper salsa and ghost pepper queso to have at our lab tamale party in December!
We ended up attributing the activity to two novel AMPs that don’t really classify into any of the known major plant AMP families. We were able to determine the full sequences and experimentally determine the disulfide bond linkages.