In the February 2021 ASP Newsletter I commented on and gave “potted precises” of the work done on large scale repurposing of known drugs in order to try to “short-circuit” the time required to test, and hopefully bring to market, a number of potential candidates as drugs, ideally delivered orally. The idea behind repurposing is that since the toxicities, pharmacodynamics and pharma­cokinetics had already been established, and those data led to the approval by the FDA or comparable regulatory agencies, the time required would be materially shortened.

As a result of two very large and subtly different ap­proaches, a number of known, and in some cases not so well-known, structures, a significant number of which would fall under the “NX” series in the Newman and Cragg lexicon where “X” = null, B or D, were published in two Nature papers (see earlier article for references/ structural types).

However, in a very recent article in Science (1) both sets of authors in a joint paper demonstrated that a significant proportion of the compounds identified, including a num­ber of those “pushed by various political figures” in the early stages of the “pandemic,” were artifacts in terms of being antiviral agents and/or leads thereto.

The idea behind repurposing is that since the toxicities, pharmacodynamics, and pharma­cokinetics had already been established, and those data led to the approval by the FDA or comparable regulatory agencies, the time required would be materially shortened.

The “cellular” reason why these compounds, some of which are shown in Figure 1 and fall under the soubriquet of “CADS” or cationic amphiphilic drugs, appeared to be potential antivirals was that they caused a cellular condi­tion known as phospholipidosis. In this side effect, there is formation of vesicle-like structures, which can be seen under suitable microscopy as “foamy” or “whorled” mem­branes which may arise by CAD disrupting normal lipid homeostasis. In addition, these agents can accumulate in endosomes and lysosomes where they might directly or indirectly inhibit lipid processing. Modulation of these lipid processing pathways is critical for viral replication as virions usually enter the cell via formation of complexes with membrane lipids. Inhibiting phospholipid production/utilization by any means can stop virus proliferation, and such methods have been shown to be associated with inhibition of coronavirus replication.

The following paragraph is from the authors conclu­sions in the Science article (1) and puts the problems they found in a succinct paragraph.

“These caveats should not obscure the central obser­vation of this study. Many drugs repurposed for antiviral activity against SARS-CoV-2 are cationic amphiphiles, and despite their diverse structures and multiple tar­gets, many likely have their antiviral effects via a single shared mechanism: phospholipidosis. Both because of the side effects with which it is associated, and the lim­ited efficacy to which it leads—rarely better than 100 nM in vitro—drugs active due to phospholipidosis are unlike­ly to translate in vivo. Many resources will be saved by counter-screening for phospholipidosis in simple cellular assays, allowing investigators to focus on drugs with gen­uine promise as antivirals.”

Finally, they comment on the vast numbers of clinical trials that still appear to be in use, or in some cases might just have been “finished or terminated,” and I have also put the paragraph in unedited except for removal of the embedded citation numbers.

“The cost to the community of investments in what ap­pears to be a confound merits consideration for future pandemics. According to the DrugBank COVID-19 dash­board, which draws from US and international clinical tri­als, putatively antiviral CADs have been promoted into an astonishing 316 Phase I to Phase III clinical trials against COVID-19. While 57% of these trials study the phospholipidosis-inducing CADs hydroxychloroquine or chloroquine, that still leaves 136 trials across 33 oth­er predicted or known phospholipidosis-inducers. Using conservative estimates the expense of the clinical trials component alone, over the last year, for phospholipidosis-inducing CADs may be over $6 billion US dollars.”

"Using conservative estimates the expense of the clinical trials component alone, over the last year, for phospholipidosis-inducing CADs may be over $6 billion US dollars.”

In a paper published in 2020 in ACS Infectious Diseases, Hussein et al. (2) reported synergistic effects between the cationic antibiotic polymyxin B (which used to be discard­ed if discovered in screens in the 1970s) and the sero­tonin uptake inhibitor sertraline when used against the Gram-negative polymyxin resistant microbes A. baumannii, K. pneumoniae and P. aeruginosa. 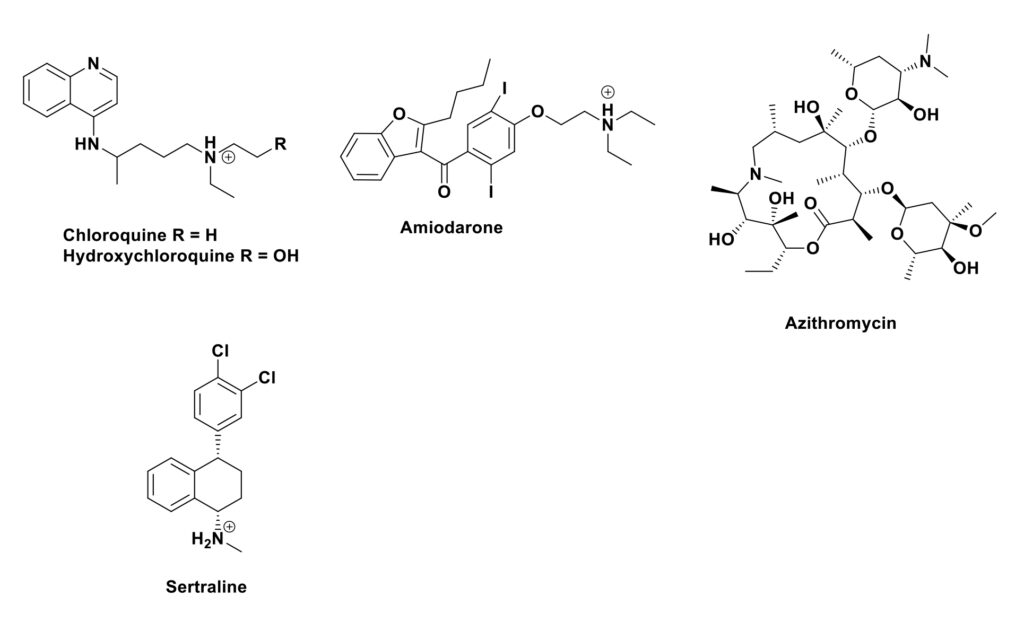 The authors then followed up the effects on the re­sistant P. aeruginosa strain using metabolomics. Unfor­tunately, even though the mixture was synergistic, the metabolomics work demonstrated that the mixture dem­onstrated that the major effects were upon the lipid and fatty acid metabolic processes due to the sertraline (Fig­ure 1). Now if this work had been sent for reviewing after the publishing of the CoV-2 paper above, it would probably never have seen the “light of day” as sertraline was one of the “problem children” identified as causing problems with cationic compounds.

SYNTHESIS AND USES OF PEPTIDIC AGENTS

However, all is not lost in terms of peptidic antibiotics and other pharmacological areas where they might be of utili­ty. In a very recent review in iScience, a group from CNPD3 at the University of Florida (3) published an open-access re­view demonstrating how both chemical and biochemical approaches can lead to a cornucopia of novel structures based upon peptide chemistry. In this, they demonstrated how NPRS and RiPPS processes can be used to produce novel agents that can then be tested in a variety of as­says, not the least, those directed towards pathogenic microbes.

This is a paper that could be used as a primer for under­graduates / early postgrads and even for those of us, like the author, who are “longer in the tooth!”

In a very recent review in iScience, a group from CNPD3 at the University of Florida (3) published an open-access re­view demonstrating how both chemical and biochemical approaches can lead to a cornucopia of novel structures based upon peptide chemistry.