Dominik Popowski is an ASP member and a graduate student in the Department of Pharmacognosy and Molecular Basis of Phytotherapy, Medical University of Warsaw. He is one of two Poland-based ASP members listed in the directory. The ASP Newsletter reached out to him for comments on March 16, and his response is below. In turn, Popowski put us in touch with Professor Oleh Koshovyi from the Department of Pharmacognosy at the National University of Pharmacy, Kharkiv, Ukraine, and we received Koshovyi’s detailed comments on March 21. Their personal accounts of the war are stark reminders of the deep impact of international conflicts. Gordon Cragg and Edward Kennelly edited the articles for clarity and content.

Perspective of an ASP Member in Poland

I am finishing my PhD at the Medical University of Warsaw in Poland, about 280 kilometers from the Ukrainian border and 400 kilometers from Lviv, a city that has sustained heavy shelling recently. My country is now feverishly trying to accommodate and comfort refugees from Ukraine. We Poles share similar memories of being oppressed and shackled by the Soviet regime.

In the Microbiota Lab where I work, there are three graduate students from Kharkiv, Ukraine. They are constantly looking at their phones, waiting for messages from their families still in Ukraine. It is impossible for us to find the appropriate words to comfort them. Before the Russian invasion on February 24, we lived in a bubble, thinking that wars and totalitarian cruelty were matters relegated to the past, or possible only in distant places. This bubble has burst, and we feel completely helpless. 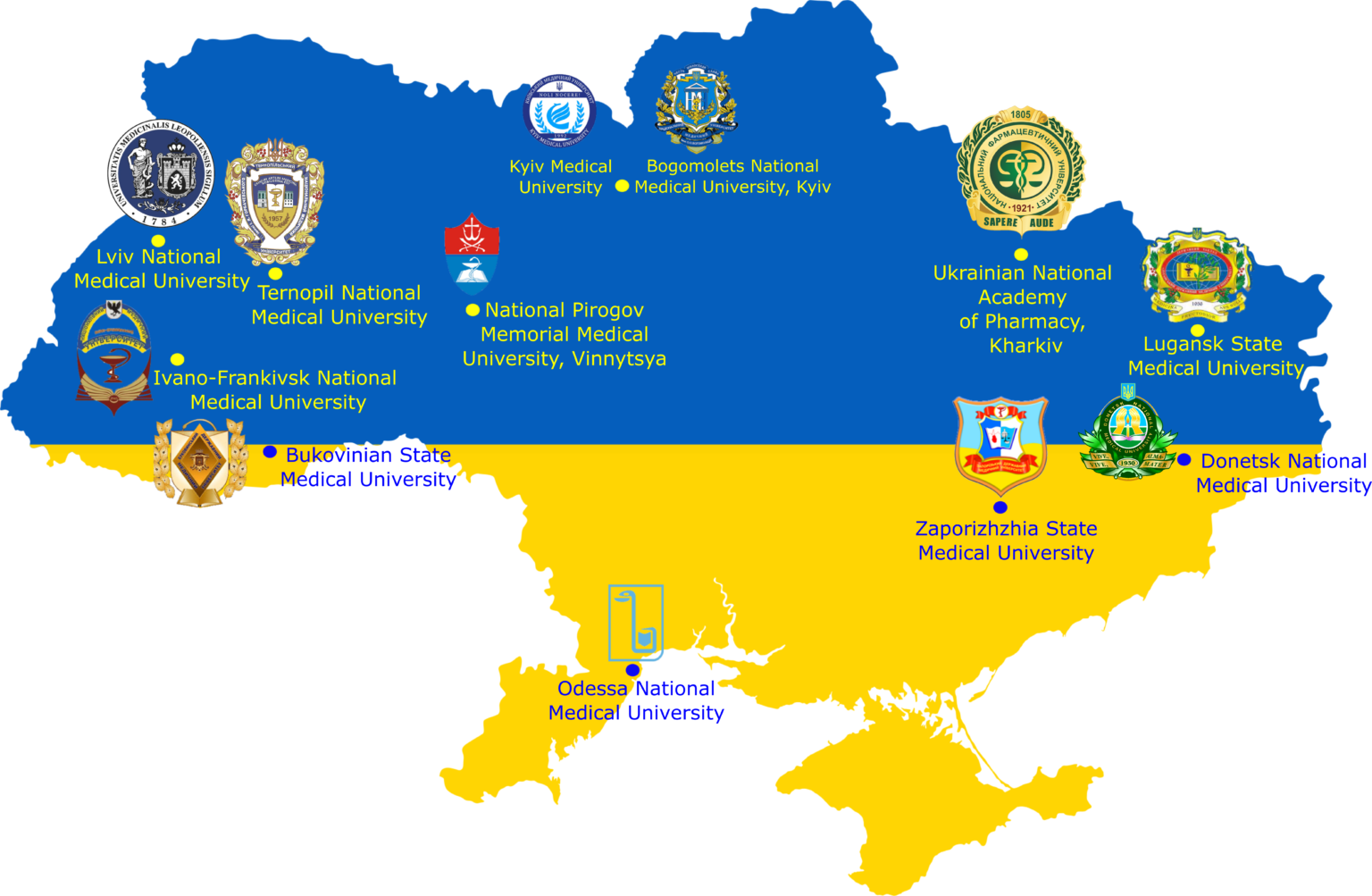 Despite these feelings of despair, we try our best to help our Ukrainian colleagues. According to my PhD supervisor, Prof. Sebastian Granica, “While facing the Russian invasion, we need to provide as much help as possible to the Ukrainian students and researchers. They have to find the ground under their feet and be able to continue education and research until the war is over and the situation is clear. However, the destruction of scientific infrastructure in cities like Kharkiv will significantly delay their return to their homeland. A lot of Ukrainian refugees believe that those are ‘forced vacations’ and they will be able to return soon to revive their country. I think we are obligated to help them and contribute to putting pressure on Russia.” 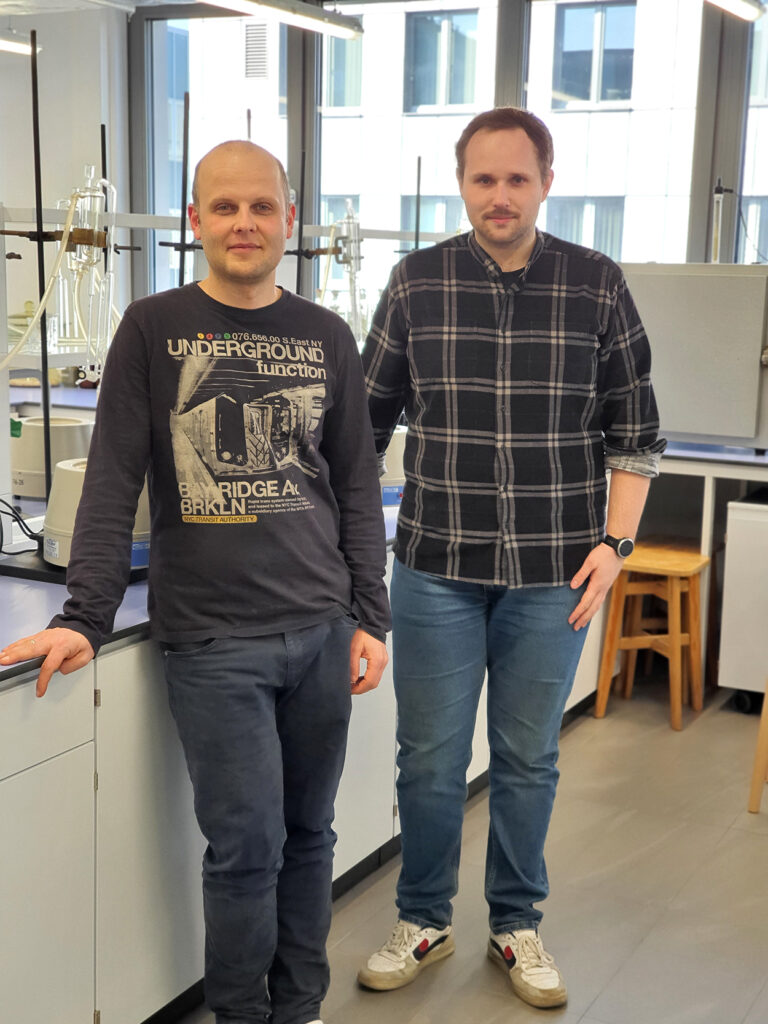 Popowski (right) with his PhD supervisor Granica in the Microbiota Lab at the Medical University of Warsaw.

In the past, many Polish people resented that the world did not seem to care when our country was devastated by the Soviets and the Nazis, and some still feel a similar frustration. We see Ukraine today from the vantage point of Poland in 1939. We feel ashamed that history is repeating itself, as children and civilians are dying. We now see how mundane our pandemic and pre-pandemic issues seem to be. I cannot bear to look at happy people on social media because seeing ordinary joys somehow sickens me.

I am still trying to figure out what more I can do. I feel that helping is one thing and stopping the madness is another. We cannot defeat Russia from the outside; we must make the people of Russia share the pain of isolation.

Yet, there are no regulations to stop thousands of trucks passing the Polish-Belarussian border and supplying Russia. The Western world’s admiration of Ukrainian President Volodymyr Zelensky is not helping because appreciation alone will not stop the missiles. French President Emmanuel Macron continues to contact Russian President Vladimir Putin, thinking there is still time to talk. Some of the biggest European natural medicines companies have been reported to be manufacturing and selling in Russia. I feel frustrated as if humanity has failed.

Dear fellow ASP members, I ask that you support the Ukrainian people and scientists in any way you can. I urge our scientific community to join others in sanctions against totalitarianism. I advocate for the following:

I implore all scientists to act immediately in any way we can to help the Ukrainian people.

Professor Oleh Koshovyi, our friend from the Pharmacognosy Department in Kharkiv, Ukraine, left his family at the Polish border and went to help in the resistance. Fortunately, we remain in contact with Prof. Koshovyi so that he can provide an inside story for the ASP community. 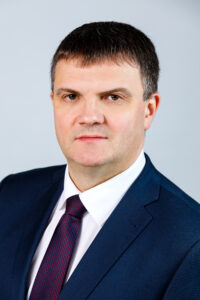 I would like to begin my story with words of gratitude to our friends from Poland, the European Union, and the United States for their support of Ukraine. We feel that the whole world is supporting us, and this gives us strength in the fight against a very serious enemy. I sincerely thank everyone for this, and the victory will surely be for democracy and freedom.

Last Friday, our friend and colleague Dominik Popowski wrote to me with a proposal to tell the members of the American Society of Pharmacognosy a true story about the Russian invasion of Ukraine. I am deeply grateful to him for this because I am convinced that the world should know as much as possible about the terrible events that are now happening in Ukraine. There is no more terrible word than “war.”

I am not a military expert, so I cannot comment on any mili­tary acts, neither morally nor legally. Therefore I decided to tell my own story, which began on February 24 at about 5:00 AM.

I am a Ukrainian scientist. I have studied medicinal plants all my life, like many of you. At the age of 27, I became a PhD, at the age of 32 a doctor of science in pharmacy, and at the age of 36 a full professor. I felt there was a bright fu­ture ahead for me. I have been devoting all my professional life to working at the National University of Pharmacy, one of the best universities in the world. I started my career there as a laboratory assistant and ultimately became the dean and the head of the department. At the end of the war, I invite you to visit our beloved university.

So let’s start from the morning of February 24. At exactly 5:00 AM, my wife and I woke up to the terrible sound of explosions. It was as if all the windows were shattering. My first words were, “The war has begun.” We went to my daughter’s room and lay down next to her, but it was no lon­ger possible to sleep. Looking out the window, we could see that the whole horizon was filled with black smoke. Soon the water supply to our house stopped, and so, at about 9:00 AM, I decided to go to the nearby well to bring water. Once outside, I immediately heard that large-caliber weap­ons were being fired in the vicinity of the city. Apparently, there was a fight nearby.

Having brought some water for my family and an elderly neighbor, I returned home and told my wife to collect our nec­cessities, and we embarked on a disturbing journey of un­certainty. I had to persuade my parents, who live next door, to leave Kharkiv. At first, they flatly refused. At 3:00 PM, all media channels warned of an air alarm and the need to take shelter. Most Kharkiv residents were not prepared and did not even know where the bomb shelters were located. My family decided to hide in the garage with a cellar. We man­aged to grab only the most basic necessities. Soon after evacuating the house, we realized that our beloved cat was still inside, so we went back and quickly picked him up. We left with only our documents, a small suitcase, and the cat in a basket. 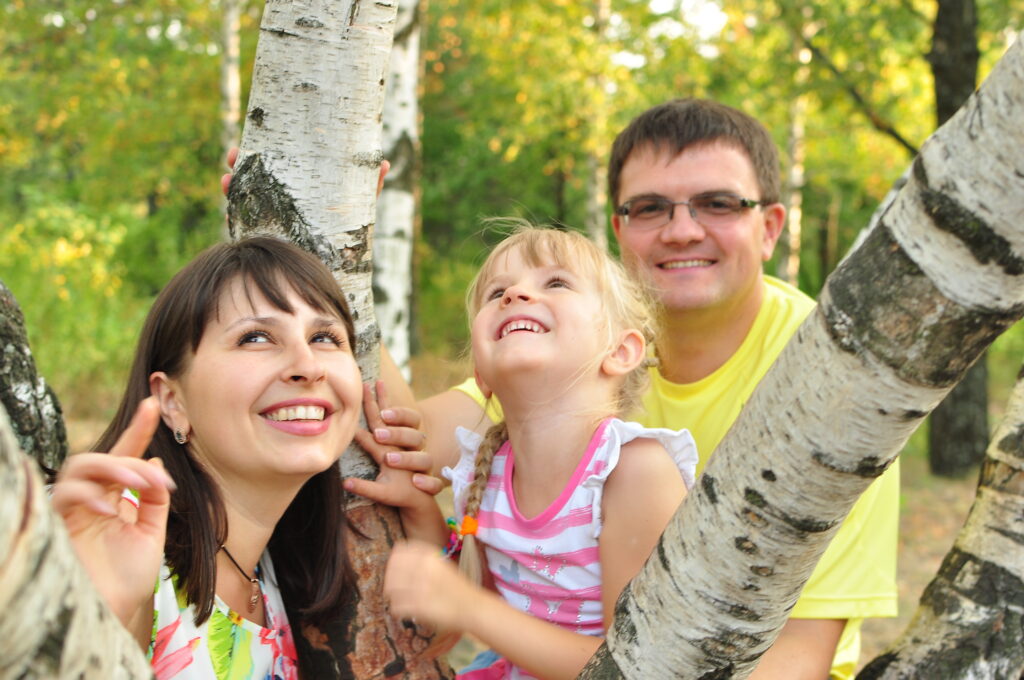 Oleh Koshovyi with his wife and daughter at the arboretum of V.V. Dokuchayev Kharkiv National Agrarian University in 2015. This university, where Koshovyi would conduct pharmacognosy practical field training, was also destroyed in the Russian invasion. PHOTO: BOHUSLAVSKYI YEVHENII

At the garage, we joined other people seeking shelter. Many of the residents of the neighboring high-rise buildings were there. We entered the cellar and began waiting; fortunately, noth­ing happened. After 30 minutes, we decided to get into the car and head towards our summer house, 26 kilome­ters from Kharkiv in the suburbs.

There we felt relieved, but not for long. We constantly heard explosions from Kharkiv. The news and videos from the city were just awful. On the second day, there were already prob­lems with food supplies. The store shelves in the village were already empty. Those small stocks that had remained from the autumn were run­ning out, but, thanks to the locals, my family was able to get some food. Af­ter the shelling hit a house in the nearby village, my family decided to move on to the western part of Ukraine.

The distance from Kharkiv to Ivano-Frankivsk is just 1085 kilometers, but the journey took us seven days by car. There were terrible traffic jams everywhere. There was no fuel near Kharkiv, and there were mile-long lines at gas stations. Thanks to the help of relatives, friends and strangers, our trip was successful.

Our relatives helped us in Kropyvnytskyi. In Vinnytsia, we were sheltered at the dormitory of Vinnytsia National Medi­cal University. But the news we were hearing became more and more bleak. When we approached Vinnytsia, their air­port had just been bombed on March 6. The feeling of fear, even in central and western Ukraine, was unbearable; at any moment we could be caught in a rocket attack. I decided at that time to move my wife and daughter to Poland.

To cross the border, I took my family to Ivano-Frankivsk, where we met with my friend, Professor Andriy Grytsyk, the head of the Department of Pharmaceutical Management, Drug Technology and Pharmacognosy at the Ivano-Frankivsk National Medical University, who welcomed my family. After a couple of days at his house, we went to the border and stood in the long line. After over six hours of waiting, my daugh­ter and wife crossed the border into Poland. I exhaled a sigh of tremendous relief. With my family now safe, I wanted to work for the benefit of Ukraine. 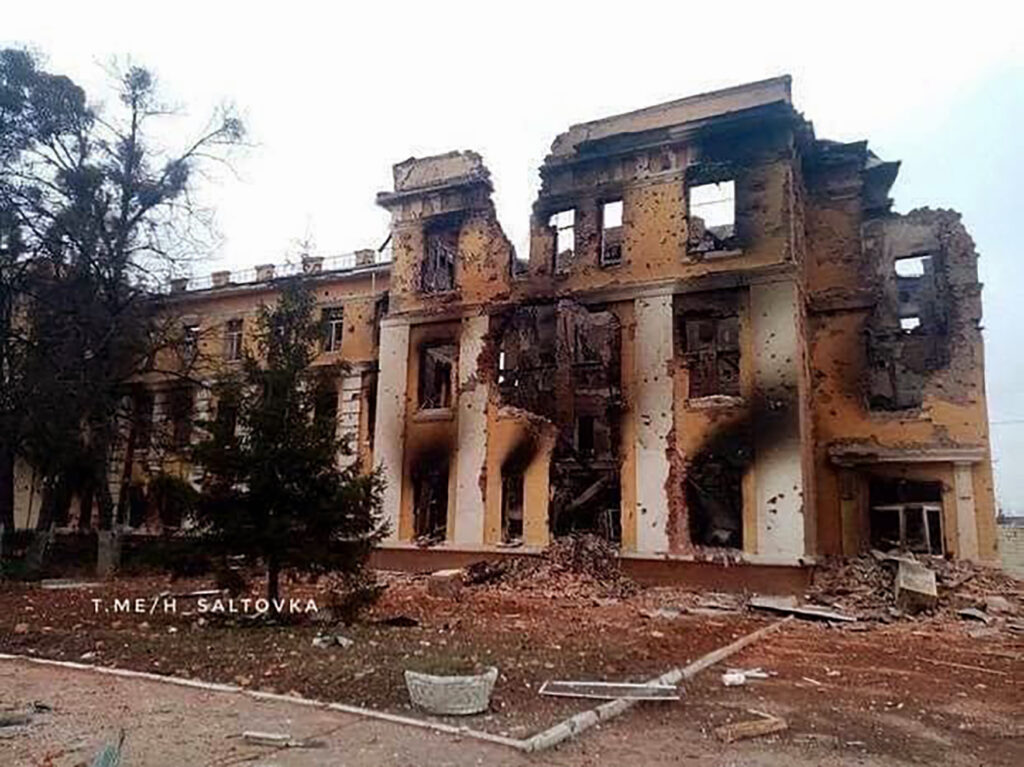 Kharkiv Specialized School of I-III Degrees (No. 134), a high school of about 450 students located less than 10 kilometers from Oleh Koshovyi’s home, was destroyed by Russian shelling during street fights on February 27.

My family eventually made it to Warsaw, and I now have great hope for a better future for them. I must sincerely thank my colleagues and friends from the Medical University of Warsaw, Professor Piotr Lulinski and Professor Sebastian Granica, who warmly received my wife and daughter in Po­land and have helped them in so many ways.

It has been almost two weeks since my family separated at the border. I miss them very much, but I am glad that they are at peace, and they are not awakened in the middle of the night by sirens. Since they left, missiles from the Russian Federation twice reached the Ivano-Frankivsk re­gion. A day has not gone by without the horrible howls of air raid sirens. Even in the west of Ukraine, there is no sense of security. The main issue now today is regarding the airspace in Ukraine, since most of the trouble comes from the air. We are all convinced that with the help of our armed forces, friends, and international partners, Ukraine will definitely win!

Update March 31: I am now in Ivano-Frankivsk, staying at my friend’s apartment. Our university is trying to organize online classes for our students, so there is a lot of work preparing these distance learning courses. I am also analyzing some data I gathered previously and planning to publish them in manuscripts. Some school friends are volunteers in Kharkiv, and at times I try to help them find different medicines in other parts of Ukraine. There is a significant problem ob­taining medicines in Kharkiv. Yesterday, my colleague and friend, Prof. Andriy Grytsyk, and I became members of the American Society of Pharmacognosy.